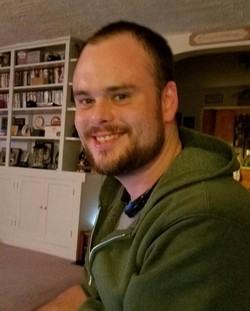 
Aaron Richard Salzwedel, age 29 of Westfield/Montello, died unexpectedly on Friday, May 19, 2017, while on duty at the Federal Correctional Institution in Oxford, WI

Aaron was born on June 21, 1987 in Madison to parents Brad and Tami (Rudolph) Salzwedel. He was baptized in 1987 at St. John’s Lutheran Church in Montello, and attended Montello’s St. John’s Lutheran School for grades K-7, where he played basketball and soccer, and performed in several plays. He then moved to Middleton and attended Kromrey Middle School for 8th grade. He was confirmed in 2001 by Pastor Randy Hunter at St. Andrew’s Lutheran Church. He graduated from Middleton High School in 2005, and from Madison Media Institute in 2008 with a degree in Video and Motion Graphics.

He started a culinary career at the age of 15 at the Marriott West in Madison. The head chef took him under his wing and mentored him in the culinary world. In 2008, he received his Food Manager Certification and worked at Dotty Dumpling’s Dowry and Edgewood College, both furthering his love for cooking. He started employment in 2013 at the Oxford Federal Correctional Institution as a Correctional Officer, and was proud to be promoted a short time later to the position of Kitchen Foreman.

Aaron enjoyed playing disc golf with friends in Madison, cooking for friends and family, playing complex multi-player games on-line, and poker night. He loved computers and built several of his own. He moved to Westfield with his brother Jamie in 2016, where his love for Jamie, his nieces Brandie and Alyssa, and their dog Merc grew into a deep relationship that became an important part of his life. He was always eager to help people out with his physical strength and emotional support. His family and friends will always remember him as a fun-loving person with a big heart and a bright and cheerful smile.

Aaron is survived by his parents, Brad & Tami Salzwedel of Sauk City; his brother, James of Westfield; nieces, Brandie and Alyssa Salzwedel of Westfield; grandparents, Harvey and Wilma Rudolph of Montello; uncles, Terence Rudolph of Denver, CO, and Rick (Diane) Salzwedel of Sun Prairie; cousins, Bobbi (Gordon) Thompson of Cottage Grove and Vicky (Mike) McNally, of Deerfield; other relatives and many friends. Aaron is preceded in death by his grandfather, Arden Salzwedel of Pardeeville and grandmother, Winnie Salzwedel of Montello.

A funeral service for Aaron will be held on Friday, May 26, 2017 at 11:00 a.m. at St. John’s Lutheran Church in Montello with Rev. Randy Hunter officiating. Burial will be in Eastside Cemetery, Montello.

The family would like to thank the staff at FCI Oxford and Marquette County EMS.


Please take a moment to view the online guestbook. Send your condolences or share a memory of Aaron with his family & friends.

To order memorial trees or send flowers to the family in memory of Aaron Salzwedel, please visit our flower store.