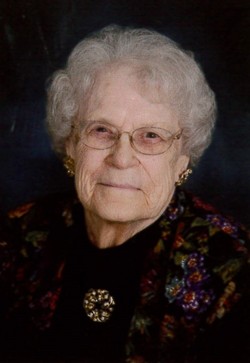 
Adeline L. (Teske) Grahn, age 94 of Berlin, formerly of Westfield, passed away on Monday, May 9, 2016 at Patriot Place Assisted Living in Berlin. She was born on December 16, 1921 at home in the Town of Springfield, Marquette County, daughter of the late Avolt and Elsie (Wruck) Teske. She married Ralph A. Grahn on August 25, 1940 in Westfield. They lived most of their life in Berlin. Ralph preceded her in death in June of 1977. Adeline retired in 1981 after working over 25 years for Truesdell Fur Company of Berlin. After retirement, she moved back to the Town of Springfield and lived near her childhood homestead. Adeline had been a member of St. John Lutheran Church in Harrisville and later Immanuel Lutheran Church in Westfield where she was baptized, confirmed and married. She enjoyed going to the Westfield meal site to visit and play cards. Adeline especially enjoyed and loved her family.

A memorial service for Adeline will be held on Tuesday, May 17, 2016 at 11:00 a.m. at Immanuel Lutheran Church of Westfield with Rev. Gary H. Schultz officiating. Inurnment will be in Westfield East Cemetery.

Please take a moment to view the online guestbook. Send your condolences or share a memory of Adeline with her family & friends.

To order memorial trees or send flowers to the family in memory of Adeline Grahn, please visit our flower store.