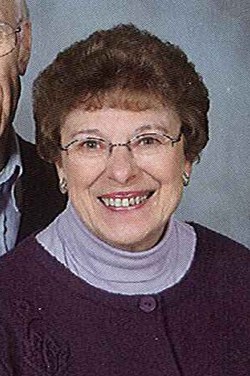 Biography Barbara M. Riehle, age 76 of Packwaukee/Menomonee Falls, passed away on Sunday, January 20, 2013 at St. Mary’s Hospital in Madison. She was born on July 22, 1936 in Milwaukee, daughter of the late Clement and Sophie (Urbaniak) Budny. Barbara married Marvin Riehle on October 12, 1957 at St. Josaphat’s Basilica in Milwaukee. She worked for the Menomonee Falls School District as a manager in the kitchen. Barbara was an active member of Good Shepherd Catholic Church in both Menomonee Falls and Westfield. She was a devoted wife, mother and grandmother.

A memorial mass for Barbara will be held on Friday, January 25, 2013 at 11:00 a.m. at Good Shepherd Catholic Church, Westfield with Father David Carrano officiating. A memorial visitation will be held on Friday from 10:00 a.m. until the hour of service at the church.
To order memorial trees or send flowers to the family in memory of Barbara Riehle, please visit our flower store.