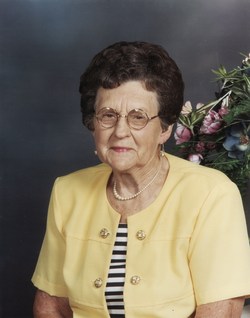 
Bernadine Elizabeth Broderick, age 89, resident of Harris Villa, (formerly Montello) was called by the Lord to her final resting place on June 1, 2011. She was born on June 18, 1921 in Buffalo Township, Marquette County the daughter of Peter and Alma (Witt) Schwochert. She was united in marriage to Francis William Broderick on July 9, 1938 at St. Andrew’s Catholic Church, Township of Buffalo. He preceded her in death on October 9, 1998. After their marriage they resided on the Broderick family farm in the township of Montello until moving to the City of Montello in 1962.
Bernadine worked in factories in Portage, Oxford, Princeton and at Montello Products for over 20 years until her retirement. She was a member of St. John the Baptist Catholic Church in Montello. She also was a past member of St. Ann’s Altar Society where she served as officer for some years. She had many interests that included gardening, crocheting, picking out hickory nuts, baking cookies and making candy for the holidays. She also enjoyed fishing, especially with her husband and spending precious time with her children, grandchildren and great-grandchildren.
She is survived by four daughters, Alice (Duane) Weckwerth, Montello, Shirley Foley, Franklin, Donna (Richard) Beahm, Montello, Lucille (Victor) Stankevich, Goodman; one son, John (Patricia) Broderick, Madison; one sister, Evelyn Hutzler, Tucson, AZ.; 14 grandchildren; 23 great-grandchildren; sisters-in-law, nieces, nephews, cousins and many friends. In addition to her husband she was preceded in death by her parents, a daughter, Jean Marie; son-in-law, John Foley; five brothers, Elmer, Gerald, Wallace, Leo and Donald; four sisters, Regina McMahon, Clara Kenyon, Helen Owen and Alice Lloyd and one great-granddaughter.
Mass of the Resurrection services will be held on Monday, June 6, 2011, 12:00 Noon at St. John the Baptist Catholic Church, Montello with Father Michael Richel officiating. Visitation will be on June 6th from 10:00 a.m. until the hour of service. Burial will take place at St. John the Baptist Catholic Church Cemetery, Township of Montello.

The family would like to thank the staff at Harris Villa, Nan & Dr. Strain for their care in helping Bernadine pass from this life to the next.

To order memorial trees or send flowers to the family in memory of Bernadine Broderick, please visit our flower store.