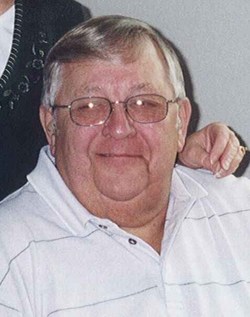 Dale E. Hyames, age 81 of Westfield, passed away on Tuesday, January 14, 2014 at Waupun Memorial Hospital. He was born on May 23, 1932 in Beloit to LaVerne and Molly (Hintz) Hyames. Dale married Donna Gray on July 3, 1954 in Endeavor. He proudly served his country with the U.S. Army during the Korean War. Dale was employed at Brakebush Brothers for 20 years and Westfield School District for ten years. He was a member of American Legion Post #244 of Westfield and Harrisville Lions Club. In his retirement, Dale enjoyed to play cards and bird watch.

A funeral service for Dale will be held on Saturday, January 18, 2014 at 11:00 a.m. at Steinhaus-Holly Funeral Home, Westfield with Pastor Alyson Janke officiating. Full military honors will follow the service at the funeral home. A visitation will be held on Friday from 4:00 to 7:00 p.m. at the funeral home and on Saturday from 10:00 a.m. until the hour of service. Memorials would be appreciated to Budda Box Fight Against Cancer of Marquette Cancer or St. Agnes Hospice Hope.

Please take a moment to view the online guestbook. Send your condolences or share a memory of Dale with his family.

To order memorial trees or send flowers to the family in memory of Dale Hyames, please visit our flower store.