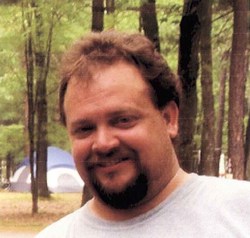 Daniel John Gsell, age 44 of Westfield, passed away on Monday, October 24, 2011 at St. Luke’s Hospital in Milwaukee. He was born on July 28, 1967 in Lombard, IL to John and Rose Mary (Kessen) Gsell. Dan was raised in Lombard and moved to Westfield in 2000. He’s worked at Pioneer Tire & Auto, Westfield as an auto mechanic since 2001. Dan liked hunting, fishing, riding his motorcycle and playing cards. He recently joined the gun club at Pioneer Park and was a member of the Jeff Sveum Racing Team for six years.

A Mass of Christian Burial will be held on Saturday, October 29, 2011 at 10:00 a.m. at Good Shepherd Catholic Church, Westfield with Fr. Michael Richel and Monsignor John Hebl officiating. A visitation will be held on Friday, October 28, 2011 from 4:00 to 7:00 p.m. at Steinhaus-Holly Funeral Home, Westfield and on Saturday from 9:00 a.m. until the hour of mass at church. Following the traditional service, Dan will be cremated and inurnment will be in St. John Catholic Cemetery, Montello at a later date. In lieu of flowers, a memorial fund will be established for Dan's son.

To order memorial trees or send flowers to the family in memory of Daniel Gsell, please visit our flower store.