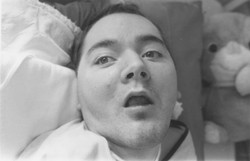 
Daniel Bruce Vaughn, age 65, was called to his heavenly home on October 31, 2016. Daniel was born in Belvidere IL, on July 23, 1951, to Charles Silas and Iris Iona (Nimrick) Vaughn. Daniel was baptized at the Free Methodist Church in Belvidere IL, in the fall of 1951. At the age of two, he was diagnosed with cerebral palsy and never walked or talked.

On October 10, 1961, Daniel was placed at the Dixon Development Center in Dixon, IL. On November 9, 1982, Daniel was transferred to the Central Wisconsin Center (CWC) for the Developmentally Disabled in Madison, WI.

Upon moving to Wisconsin, Daniel had more contact with people and excellent medical care. The staff was dedicated to working with Daniel to minimize the ill effects of his limb atrophy. He became involved in several activities offered by the Center. Dan enjoyed one on one interactions, watching wrestling on TV and people watching. He had a remarkable smile and quietly laughed when entertained. Dan always enjoyed hearing about family and football. Some of his favorite pastimes were listening to music, joining a baking/cooking group, visiting with friends and going to church.

Dan was a man who was highly regarded by his friends and family. Although he might have been perceived as a fragile, vulnerable person, instead he was known for his strong spirit, and remarkable resilience. People looked to him for the many contributions he made to the CWC community. For a number of years he had participated as an honorary faculty member in teaching college interns about Music Therapy and Occupational Therapy. People counted on him for his calm inner strength despite adversity. He often was determined to respond and communicate by using facial expressions. He was a very sociable man with many endearing qualities. He thrived on the support of his loving family, caregivers, and friends. Despite his significant health challenges, he participated in a variety of daily programs. He enjoyed spending quiet times with familiar people, but also liked to get acquainted with new people and have new experiences as long as he felt safe. He enjoyed a variety of sensory stimulation activities, and participated in many events, on and off the campus.

Visitation will be at Steinhaus-Holly Funeral Home, 519 South Charles Street, Westfield WI, on Friday, November 11, from 9:00 a.m. to 11:00 a.m. with the service immediately following. Reverend Seth Bowker will be officiating. A luncheon will be served at Calvary Lutheran Church Fellowship Hall, 202 South Farmer Street, Princeton, WI, following the service. Interment will be in the Germania Cemetery, Germania, WI, on May 27, 2017, alongside Daniel’s parents and siblings.

Daniel will be missed by many relatives, caregivers, and friends. This is a lesson that Daniel taught all of us. “Look beyond the obvious. There is always more to a person than you thought.”

Please take a moment to view the online guestbook. Send your condolences or share a memory of Daniel with his family & friends.

To order memorial trees or send flowers to the family in memory of Daniel Vaughn, please visit our flower store.