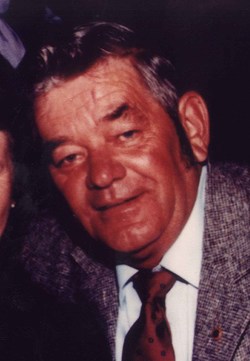 Dean W. Walters, age 83 of Harrisville, passed away peacefully surrounded by his family on Thursday, March 27, 2014 at U.W. Hospital in Madison. He was born on August 21, 1930 in the Town of Packwaukee to Leonard and Glenola (Gradwohl) Walters.

Dean grew up in Packwaukee and graduated from Endeavor Academy. He served in the Navy aboard the USS Missouri. In 1953 he married Joan Borzick at St. John’s Catholic Church in Montello. He farmed and worked as a guard at Badger Ordinance. He worked installing sewers in Westfield and at Bong Air Base. He ran a paver, working on the State Highways. He went together with Ivan Johannes and opened the Northern Bar in Harrisville. In 1967 he went together with Ben & Florence Swader to purchase Stubb’s Bar in Montello and built and ran Ben-Deano’s Supper Club until 1973. In 1975 he built and ran the Pioneer Restaurant until 1981. He owned Walter’s Construction and built barns and pole buildings for over 25 years. He went together with Smokey Alf and his brother, Dale Walters to build Call of the Wild Campgrounds in Packwaukee. Through all his ventures he also worked as an Ironworker. He worked on many projects in the Madison area including the Coliseum.

He loved to hunt and fish and spend time with his family and friends on the family farm. Many adventures and good times were spent with his hunting buddy Bernie Weber.

Many thanks to everyone he had the pleasure to have worked with in his many ventures throughout his life.

Please take a moment to view the online guestbook. Send your condolences or share a memory of Dean with his family & friends.

To order memorial trees or send flowers to the family in memory of Dean Walters, please visit our flower store.