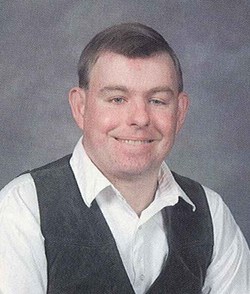 Dennis Lee Lange Rux, age 48 of Richford. Mr. Rux wasn’t with us as long as we would have loved, but was needed in God’s world. Mr. Rux passed in his home, peacefully on Sunday, May 20, 2012 with his fiancée along his side while she tended to his care, surrounded with her pure love, and some of his personal friends. He was born to Edward and Ruth (Conrad) Lange on October 25, 1963 in Adams-Friendship, (the Swamp Angels), as he’s been known to say from time to time. He enjoyed going back to where he was born (generally on medical appointments the last few years). Mr. Rux graduated from Wautoma High School on May 30th 1982 and loved the Wautoma Hornets. He supported his community with buying sports memorabilia sportswear from local shops in the area. While at a young age he completed boot camp in the U.S. Military but was medically discharged despite his desire to serve his country. Mr. Rux enjoyed the nature and comfort of his home with his fiancée, and while he enjoyed the public some, worked when he did not have to, as he was a millionaire he felt and knew. He loved his hometown that he lived in. He was relatively a private man just enjoying life in its most natural way, with his pets at his side. Mr. Rux loved the sports world and also enjoyed singing live from his home, as he was an expert D.J. and singer. Mr. Rux spoke three languages, English, Spanish and Italian.

Survivors include his fianceé, Tomasa Canales; brothers Robert (Jean) Lange and Ronald (Laura) Lange; sisters Bonnie (Virgil) Langrehr and Mary (Edward) Zwolinski; sister in law, Patty Lange; his many cousins, nieces, nephews, other relatives and friends. Mr. Rux loved his entire family with great enormity. He was preceded in death by his parents and a brother, Duane Lange.

God loving, and a lover of life, The Rux, while he saw life in such a unique magical (real) way; that just wasn’t so understandable to many of us, but once known, his logics and understandings made perfect sense in an imperfect world. Some of his best joys and love was when he met his fiancée, together 8 years, retiring together, as his fiancé enjoyed life with him, as she cared and loved him.

A funeral service will be held on Thursday, May 24, 2012 at 12:00 p.m. (noon) at Steinhaus-Holly Funeral Home in Westfield with Pastor Terry Temanson officiating. Burial will be in Harrisville Cemetery, Town of Harris. A visitation will be held on Thursday from 10:00 a.m. until the hour of service.
To order memorial trees or send flowers to the family in memory of Dennis Rux, please visit our flower store.