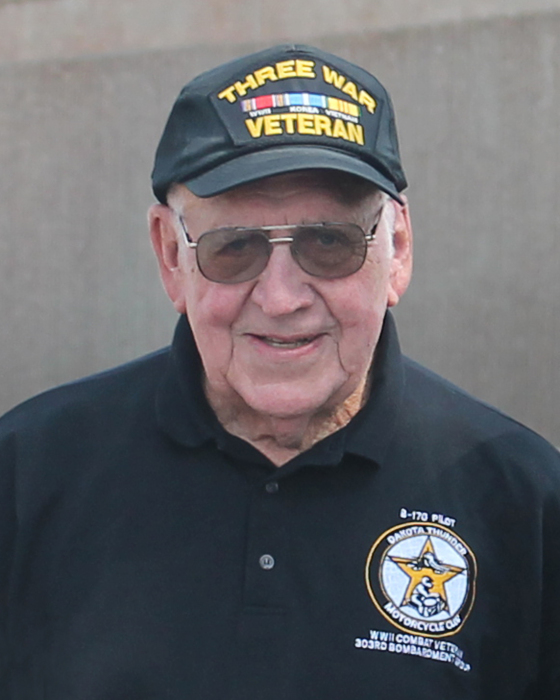 Donald was born on Jan. 20, 1922 to Robert and Lydia Smith.  He grew up on a farm in rural Oxford, WI and learned the value of hard work. He attended a one room schoolhouse and graduated from the Oxford High School. One day while doing farm chores he spotted an airplane on the horizon and dreamt that he would fly a plane someday. Donald’s first job was in the bridge maintenance department with the Soo Line Railroad in Stevens Point.  Donald met his second wife, Mary Barbara Borden, a nurse from New Milford, Conn while stationed in Puerto Rico. They were married in 1969.

During WW2 Donald volunteered for the United States Armed Forces. He was commissioned an officer, obtained his dream of flying planes and earned his aviator wings.  His aeronautical career started in smaller single occupant aircrafts, and then progressed onto the B-17 bombers, cargo and troop carrier aircrafts, C-54’s, C-124’s, & C-130’s. He was the maintenance-in-charge officer for the C-5’s (Americas largest cargo jet aircraft). He attended specialized flight training schools and became a pilot in a “flying Fortress” B-17 bomber crew and was sent to Molesworth, England. In June 1944, he joined the 8th Air Force, in the 427th Squadron, part of the famed 303rd Bombard Group (H), the outfits nick name was “the Hells Angels”.  He flew 34 combat missions over Nazi held territory and received the Bronze Star, Air Force Commendation, Air Force Air Medal with six oak leaf clusters and the Meritorious Service Metal with one oak leaf cluster during his military career.

During the Korean Conflict Donald returned to active duty flying C-54’s in support and re-supplying missions throughout Asia. He flew C-124’s during peacetime all over the world to include stateside bases, Europe, polar sites in Alaska and far Northern Canada along America’s outer radar perimeter, the DEW line (Defense Early Warning) network. He also participated in large military exercises in conjunction with the US Army by flying and transporting soldiers, paratroopers and their equipment during the Bright Star/ Pine Cone #1 and #2 maneuvers. In the C-130’s he flew with the 53rd Weather Reconnaissance Squadron, “the Hurricane Hunters”.  He gained additional duties and responsibilities as an aircraft maintenance officer and spent tours of duty at Donaldson AFB, Greenville, SC, Hunter AFB, Savannah, GA, Ramey AFB, Puerto Rico, Scott AFB, Belleville, IL, and Phang Rang AFB South Viet Nam. His last assignment was maintenance-in-charge officer of the C-5’s at Dover AFB, DE. He retired from the Air Force after 32 years of service with the rank of Lieutenant Colonel as a war veteran of three wars (WW2, Korea and Viet Nam). He was the 2012 military honoree at the 71st Black Hills Motor Cycle Rally in Sturgis, SD.

After his retirement, Donald and Barbara moved into the Woodland Hills subdivision in Black Hawk, SD. They held annual neighborhood picnics and get togethers in their front yard under the giant Ponderosa pine trees.  In his civilian life, Donald became heavily involved in community affairs or events and he was often the driving force behind getting projects accomplished. He served on the subdivisions water board and attended several committee meetings with county officials, with like minded homeowners and sympathetic supervisors of Meade Co to help persuade them to blacktop the only entrance to their subdivision. He was also a member of the Meade Co HUD elder care. SD Governor Bill Janklow presented him with the Jefferson Award for meritorious service to his community.  Donald had a knack for construction and for doing improvement projects. He built six houses in Woodland Hills and a warehouse that became the Old Glory Fireworks Co. and more recently the Ranch Restaurant. He helped with the fabrication of the stone portal pillars at the Piedmont Cemetery.  Donald was also instrumental in the planning, building and completion of the Our Lady of the Black Hills Catholic Church. He was very busy and supported all church fundraising activities and served in leadership positions on many committees.

Donald’s hobbies included being a 2nd generation bee keeper and he was named the Delaware State Bee Inspector. He gave away jars of honey to his neighbors and friends. He was known as “Sundown” at the regular Thursday night poker gatherings. He always enjoyed the banter and brinksmanship required in a spirited game of cards.  He dabbled in the stock market and was an astute investor in real estate. He volunteered his time driving friends and veterans to and from their medical appointments and he dispensed medications at Ellsworth AFB in Rapid City, SD. Donald was truly a one-of-a-kind person who made a big difference in this world through his good works and deeds and his “can do” positive attitude. He will be greatly missed by all who shared time with him.

A Memorial Mass of Christian Burial for Donald will be held on Saturday, August 19, 2017 at 11:00 a.m. at Good Shepherd Catholic Church, Westfield with Father Paulraj Sellam officiating.  Full military honors will be presented by Westfield Area Veterans on Saturday following mass at the church.  You are welcome to join the family at a celebration of life luncheon following the ceremonies in the lower level of the church.

A Memorial Service will be held at 12:30pm on Tuesday, October 10, 2017 at Our Lady of the Black Hills Catholic Church in Piedmont and inurnment with military honors provided by the Ellsworth Air Force Base Honors Team, will be next to his wife, Barbara in the Black Hills National Cemetery near Sturgis, SD at 3:00pm.

Please take a moment to view the online guestbook.  Send your condolences or share a memory of Donald with his family & friends.

To order memorial trees or send flowers to the family in memory of Donald Smith, please visit our flower store.