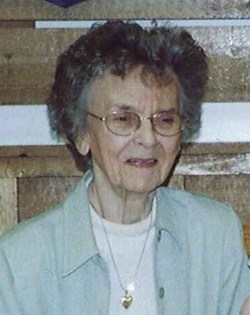 Biography Dorothy Kramer Janke, age 91 of Westfield, passed away on Thursday, October 27, 2011 at the Montello Care Center. She was born on August 25, 1920 in Washington County, Wisconsin, the youngest of six children to Louis and Katherin (Held) Kramer. Dorothy married Elson A. Janke on August 14, 1939 in Dubuque, IA. They were married 65 years before he passed away on November 23, 2004. As a young girl her family ran a boarding house and farmed next to Holy Hill (Sussex, WI) until she was 13. The family then moved to Coloma and later to Westfield. Dorothy’s parents moved to California when she was 17, she decided to stay in the area instead. Over the years she worked at Eubanks Department Store, Marquette County Health Services, was a fund raiser for various charitable causes, the wife of the Westfield Fire Chief for many years and the bookkeeper for the family business, Dugan Motors until Elson retired at the age of 75.

A private family memorial service will be held. Inurnment will be in Westfield East Cemetery.
To order memorial trees or send flowers to the family in memory of Dorothy Janke, please visit our flower store.