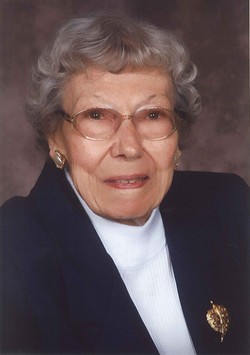 Dorothy Ann Streich, age 93 of Harrisville, passed away peacefully on Saturday, September 26, 2015. She was born on November 27, 1921 in Harrisville, daughter of the late Theodore and Gertrude (Thalacker) Frank. Dorothy married Arnold Streich on June 19, 1943 in Harrisville. Arnold preceded her in death on June 1, 1993. She was a lifelong member of St. John’s Lutheran Church, Harrisville, being baptized, confirmed and married there. Dorothy was also active at St. Paul’s Lutheran Church, Crystal Lake, as their organist for 38 years. She dedicated her life to her church and family. Dorothy enjoyed knitting and quilt making for Lutheran World Relief as well as cooking, gardening and feeding her birds.

Please take a moment to view the online guestbook. Send your condolences or share a memory of Dorothy with her family & friends.

To order memorial trees or send flowers to the family in memory of Dorothy Streich, please visit our flower store.