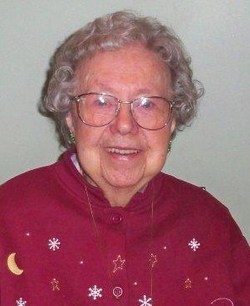 Biography Dorothy M. Thalacker, age 94, of Fishers, IN, formerly of Ft. Wayne, IN died Friday morning, October 26, 2012 in her apartment at Windermere Senior Living. She was making coffee and getting ready for the day.

Born April 8, 1918 in Milwaukee, WI, Dorothy moved to Indiana after marrying her husband Hubert in 1945. She was a member of Messiah Lutheran Church, Ft. Wayne, for over 50 years until she moved to the Indianapolis area in 2010. She was an active member of the choir, sewing circle, alter guild and made meals and organized many a lunch for funerals.

She is survived by four children: Jim (Linda) Thalacker, Lois (Melvin) Hoot, June Thalacker and Doug (Linda) Thalacker, five granddaughters (three grandsons in law), six great-grandchildren and two sisters – Shirley and Evelyn. She follows her husband Hubert (died 2003), eight sisters and two brothers in death. She will be missed dearly by many family and friends.

Visitation with the family will be held on Saturday, November 3, 2012 at Steinhaus-Holly Funeral Home in Westfield, WI from 11:00 – 12:00 p.m. followed by a graveside service at 12:30 p.m. at Harrisville Cemetery where she will rest beside Hub.

To order memorial trees or send flowers to the family in memory of Dorothy Thalacker, please visit our flower store.