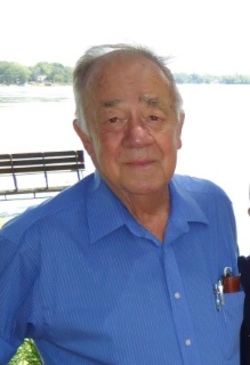 
Duane Charles Weckwerth of Montello, WI entered Eternal Life on March 15, 2017. He was welcomed by his wonderful son, Dan Weckwerth. Duane was born on May 25, 1937 in Briggsville, WI. He married Alice Marie Broderick at St. John the Baptist Catholic Church, Montello in 1959.

Duane graduated from Montello High School in 1955. He worked in Milwaukee where he was employed at Badger Die Casting until moving back to Montello in 1973. He was employed by Wil-Kil Pest Control for many years. In his younger years, he was an avid baseball player and was well-known in the Montello and Milwaukee areas as a great pitcher. He also enjoyed basketball, golf, hunting, ping pong, billiards, bowling, many special family trips, boating and teaching many family and friends how to water ski, including his 70-yr-old mother-in-law. He even made an appearance on “Bowling for Dollars!” His favorite pastimes were watching sports on TV and fishing off his pier. Duane & Alice enjoyed spending the winter months with their son in Las Vegas and their daughter and family in Colorado where Duane was a big fan at his grandchildren’s sporting events.

A Memorial Mass of Christian Burial for Duane will be held on Tuesday, June 27, 2017 at 12:15 p.m. at St. John the Baptist Catholic Church, Montello with Father Paulraj Sellam officiating.

Please take a moment to view the online guestbook. Send your condolences or share a memory of Duane with his family & friends.

To order memorial trees or send flowers to the family in memory of Duane Weckwerth, please visit our flower store.