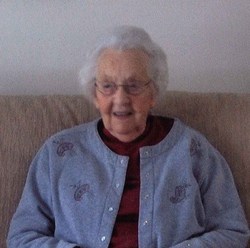 She was born August 28, 1922 in the township of Crystal Lake, Marquette Co. the daughter of Ella (Polfuss) and Christoph Muehrer.

Eileen graduated from Westfield High School and Wautoma County Normal school after which she taught school for two years before her marriage to Herbert Klimke on May 30, 1943. In addition to raising their three children, she worked along-side Herbert at Peter Hand Research and Dairyland Poultry Farm as the record keeper for the experimental studies. After their retirement from the farm, Eileen worked at Brakebush Bros. for seven years. For many years, she kept busy as a member of the Budsin Learn and Do Club.

She was a life long member of St. John’s Lutheran Church in Budsin where she was baptized, confirmed, and married. She also served the church as a teacher for Sunday School and Vacation Bible School and was a member of the Mary Martha Guild for many years.

In retirement, she and Herb traveled, gardened and enjoyed their many friends and their retirement home in the country. Eileen moved to Madison to Oakwood
Village upon Herbert’s death in 2004 and made many friends, but still was able to stay connected to St John’s Church and to the Budsin community.

A funeral service for Eileen will be held on Thursday, May 5, 2011 at 11:00 a.m. at St. John Lutheran Church, Budsin with Rev. Ronald Schultz officiating. Burial will be in St. John Lutheran Cemetery, Budsin. A visitation will be held on Wednesday, May 4, 2011 from 4:30 to 7:00 p.m. at Steinhaus-Holly Funeral Home, Westfield and on Thursday from 10:00 a.m. until the hour of service at the church. Memorials can be made to St. John’s Church/Cemetery or Oakwood Village, Madison.


To order memorial trees or send flowers to the family in memory of Eileen Klimke, please visit our flower store.