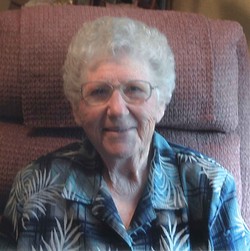 Elda M. Quinn, age 87 of Westfield, formerly of Madison, passed away peacefully from complications of an aneurysm on Wednesday, October 8, 2014 at Divine Savior Hospital in Portage. She was born on December 8, 1926 in Westfield the only daughter of the late William and Edna (Wiesjahn) Polinske. She married Neale Quinn on November 17, 1946 in Camp Campbell, TN. Neale preceded her in death on December 24, 2010.

Elda & Neale raised their four children in Madison, living there over thirty-years. Elda was preceded in death by her 19 year old daughter, Cindy in 1980. Elda was a homemaker most of her life enjoying baking pies, cooking and gardening and family vacations. After the children became older, Elda began working at the employee cafeteria at Sear’s & Roebucks, where her quick wit and sense of humor became a desirable lunch experience. In the 1970’s Elda became a prestigious woman bowler in the Madison area, bowling four times a week, attending state & national tournaments and being a member and officer of the Madison Women’s Bowling Association.

In 1984, Elda & Neale returned to their hometown of Westfield, remodeling a 100 year old Victorian home for their retirement years. Enjoying trout fishing, ice fishing, blueberry and morel mushroom hunting along with monthly “Cousins Breakfast” to visit with family. Elda will be truly missed by all her family and friends.

A funeral service for Elda will be held on Tuesday, October 14, 2014 at 11:00 a.m. at Immanuel Lutheran Church, Westfield with Rev. Gary H. Schultz officiating. Burial will be in Riverside “Lawrence” Cemetery, Town of Westfield. A visitation will be held on Tuesday from 9:30 a.m. until the hour of service at the church. In lieu of flowers, memorial contributions will be distributed to Immanuel Lutheran Church and Budda-Box Fight Against Cancer of Marquette County.

Please take a moment to view the online guestbook. Send your condolences or share a memory of Elda with her family & friends.

To order memorial trees or send flowers to the family in memory of Elda Quinn, please visit our flower store.