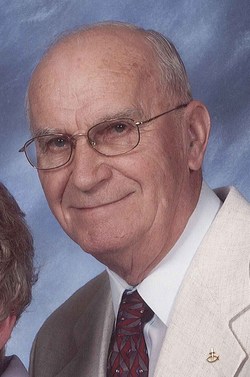 
Eldon Lawrence Gilgann, age 89 of Wautoma, passed away on Friday, July 25, 2014 at his home. He was born on November 25, 1924 in the Town of Crystal Lake to Paul and Ananda (Schwanke) Gilgann. Eldon was baptized at St. John Lutheran Church in Budsin and confirmed at St. Peter Lutheran Church in Germania. He married June Klimke on June 10, 1950 in Harrisville. Eldon worked as a farmer, milk hauler for Shields Creamery, truck driver for Brakebush Brothers, an O.T.R. driver for Ross Caves and Westfield Equipment. After retiring he drove truck for 11 years at Apollo Tool.

Please take a moment to view the online guestbook. Send your condolences or share a memory of Eldon with his family & friends.

To order memorial trees or send flowers to the family in memory of Eldon Gilgann, please visit our flower store.