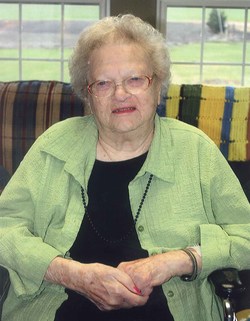 Elizabeth “Betty” R. Guptill, age 92 of Westfield, passed away peacefully on Thursday, August 15, 2013 at Harris Villa of Westfield. She was born on March 4, 1921 in Lawrenceburg, KY to Albert and Arzetta (Schad) Rucker. Betty married Clarence “Mickey” Guptill on June 11, 1942. Betty and Clarence were in business in Horicon from 1949 to 1988 as owners of Guptill Dodge, Chrysler and Plymouth. She was a member of the V.F.W., Westfield and American Legion, Horicon Ladies Auxiliary, Order of the Eastern Star and a member and elder of the First Presbyterian Church of Westfield. Betty enjoyed fishing, camping, gardening, watching wildlife, especially deer and reading the bible.

A funeral service for Betty will be held on Tuesday, August 20, 2013 at 11:00 a.m. at First Presbyterian Church, Westfield with Rev. Stephen Bowie officiating. Burial will be in Sheldon Cemetery, Town of Harris. A visitation will be held on Monday, August 19, 2013 from 4:00 to 7:00 p.m. at Steinhaus-Holly Funeral Home, Westfield and on Tuesday from 10:00 a.m. until the hour of service at the church.

Please take a moment to view the online guestbook. Send your condolences or share a memory of Betty with her family.

To order memorial trees or send flowers to the family in memory of Elizabeth Guptill, please visit our flower store.