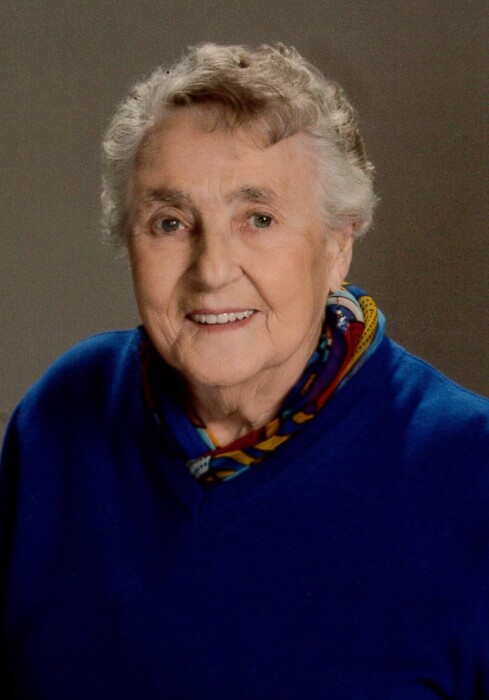 She was born on June 5th, 1932, in Coloma Michigan, first child of Reverend Werner Franzmann and his wife Naomi, big sister to four much-loved brothers. In 1942, they moved to Saginaw Michigan where she received a Lutheran education which she continued in New Ulm, Minnesota. Her college education was cut short by a teacher shortage. She went out teaching at St. Paul’s Lutheran School    in Lake Mills, Wisconsin at age 19! She quit teaching to have children, then returned in 1957 as sole provider for her family. In 1960 she married Hance Harlan Russell and moved to the family dairy farm on Russell Flats, outside of Westfield, Wisconsin. Hance adopted Mark and Merry, and they went on to have 3 more children, Patricia, Naomi   and Francis. After her children were becoming independent, she went to work, first for Brakebush, then for CAP Services. In 1978 she went back to her first love. She taught at St. John’s Lutheran School in Montello from 1978 to 1998. Through the years she never forgot her dream of a college degree. She worked hard, completing it at UW Stevens Point in December 1985. After retiring she started a tutoring program for St. John‘s.

Elsa was almost always in a church choir. She carted her children back and forth to church and school activities.  When her kids were growing up she took her turns as room parent or 4H Leader. She had huge vegetable gardens and froze and canned so her family had lots of delicious food.

When life slowed down a little she had time for flower gardening, traveling, reading, and doing crossword puzzles. Her youngest son, Frank, kept her spirits young. She had him home every other weekend and took him to church every Sunday. In these last years she’s served on two Human Services tasks forces.

Her St. John’s friends, parents and students were always in her heart as were the many friends she made through the years. Rather than flowers, her family is sure she’d rather have gifts to St John’s Lutheran School.

Please take a moment to view the online Tribute Wall.  Send your condolences or share a memory of Elsa with her family & friends.

To order memorial trees or send flowers to the family in memory of Elsa Russell, please visit our flower store.