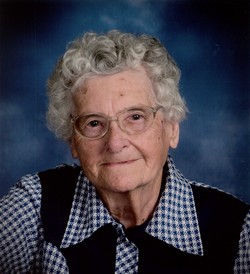 
Esther C. Klapoetke, age 94 of the Town of Harris, passed away peacefully on Thursday, July 27, 2017 at St. Clare Hospital in Baraboo. She was born on October 8, 1922 in Rio, Wisconsin to Almon and Clarice (Grimby) Porter. Esther married Sylvester A. Klapoetke on April 19, 1941 in Doylestown, WI. She was a homemaker and raised seven children. Esther also worked at Brakebush Brothers, retiring in 1989. She enjoyed traveling, baking and gardening, especially her flower gardens.

A Mass of Christian Burial for Esther will be held on Tuesday, August 1, 2017 at 11:00 a.m. at Good Shepherd Catholic Church, Westfield with Father Paulraj Sellam officiating. Burial will be in Sheldon Cemetery, Town of Harris.

Please take a moment to view the online guestbook. Send your condolences or share a memory of Esther with her family & friends.


To order memorial trees or send flowers to the family in memory of Esther Klapoetke, please visit our flower store.