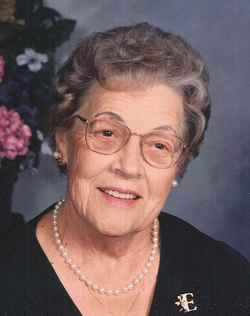 
Evelyn E. Wandry, age 94 of Hockessin, DE, formerly Westfield, Wisconsin, passed away quietly in her sleep on Thursday March 8, 2012 at the Franciscan Care Center in Hockessin, DE. She was the wife of the late Samuel R. Wandry, who died in 1983 and with whom she shared 43 years of marriage.
Born in Brooks WI, she was a daughter of the late Earl Parks and Mildred Noyes Parks, and sister to Dorothy, Elizabeth. Ronald, Donald, Harold, and Louis.
“Evie” was the founder and operator of “Wandry’s Shore Resort” on Lawrence Lake for over 20 years, and also worked for Westfield School District.
She was a member of Hamerton United Methodist Church in Chadds Ford PA and a member for over 60 years of the Ladies Auxiliary of VFW Post 8718 in Westfield WI. Her greatest pleasures were found in her gardens and in serving others.

You are invited to visit with Evelyn’s family 10:30 - 12:00 p.m. on Wednesday, March 14, 2012 at New Beginnings Christian Community Church, Westfield. Her funeral service will follow at 12:00 p.m. (noon) with Pastor Terry Temanson officiating. Interment will be in Riverside “Lawrence” Cemetery, Town of Westfield.

To order memorial trees or send flowers to the family in memory of Evelyn Wandry, please visit our flower store.