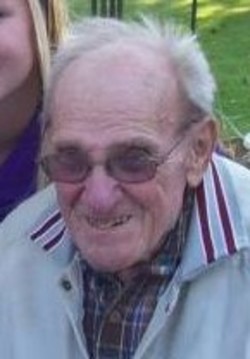 Fred J. Ciezadlo Sr., age 86 of Westfield, passed away peacefully surrounded by his loving family on Monday, October 13, 2014 at Berlin Memorial Hospital. He was born on November 1, 1927 in Chicago, IL to Stanley and Josephine (Koziol) Ciezadlo. Fred graduated high school in Chicago in 1944. He was immediately drafted and served his country in the United States Army. Fred married Evelyn Phillips Clapper in August of 1967 and in 1979 they renewed their vows. In 1967 he moved his family to Westfield but continued commuting back to Chicago where he worked for Rayco Paint Co. for a total of 46 years retiring in 1993. After a couple years of retirement, Fred worked for Brakebush Brothers for 14 ½ years. He enjoyed fishing, wood working, decorating the house and yard for the holidays and the changing seasons, tinkering with different projects and especially spending time as a family. Fred was a member of the Knights of Columbus for over 50 years and is a 4th degree honorary life member.

A memorial service for Fred will be held on Saturday, November 1, 2014 at 11:00 a.m. at First Presbyterian Church, Westfield with Rev. Susan Vergeront officiating. Full military honors will follow the service at the church. A memorial visitation will be held on Saturday from 9:00 a.m. until the hour of service at the church. In lieu of flowers, memorials would be appreciated to the family.

Please take a moment to view the online guestbook. Send your condolences or share a memory of Fred with his family & friends.

To order memorial trees or send flowers to the family in memory of Fred Ciezadlo Sr, please visit our flower store.