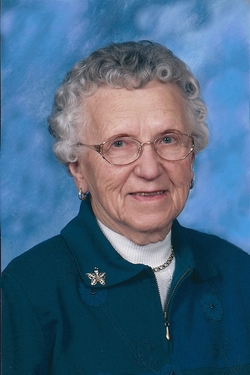 Geraldine Grabarski Smith, age 87 of Westfield passed peacefully away on Sunday, July 8, 2012 at St. Clare Hospice House in Baraboo, after a courageous bout with cancer. She was born to Casper and Alma (Engnath) Grabarski on March 17, 1925. She attended East Easton Grade School, Adams-Friendship High School and Madison Business College. She then worked for Attorneys Ela, Christenson & Ela in Madison until she married Durwin Smith on May 18, 1946.

They were blessed with three children. They enjoyed dancing with the Jolly Squares Square Dance Club for many years, playing euchre and riding the bus with many friends.

A funeral service for Geraldine will be held on Saturday, July 14, 2012 at 11:00 a.m. at St. John’s Evangelical Lutheran Church, Oxford with Pastor Frank Giebel officiating. Burial will be in Oxford Village Cemetery. A visitation will be held on Friday, July 13, 2012 from 4:00 to 7:00 p.m. at Steinhaus-Holly Funeral Home, Westfield and on Saturday from 9:30 a.m. until the hour of service at the church. In lieu of flowers, per her request, memorials can be made to Budda-Box or St. John's Lutheran Church in Oxford.

To order memorial trees or send flowers to the family in memory of Geraldine Smith, please visit our flower store.