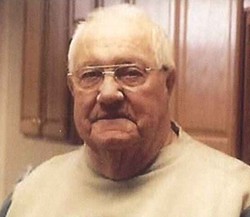 Harold W. Harris, age 90 of Oxford, passed away peacefully at his daughter’s home with his loving family by his side on Sunday, April 26, 2015. He was born on December 18, 1924 in Grand Forks, North Dakota to Henry and Hannah (Bangs) Harris. Harold was united in marriage to Betty M. Bevan on September 7, 1946. Betty preceded him in death on November 22, 2010. He proudly served his country in the United States Army during WW II.

Survivors include his daughter, Dianne (Michael) Kazmer; one granddaughter, Sandy (Kenneth) Cornwall; two great grandchildren, Kenneth and Michael Cornwall; many nieces, nephews and other beloved family and friends. Harold was preceded in death by his parents and his brothers and sister.

A funeral service for Harold will be held on Saturday, May 2, 2015 at 1:30 p.m. at Steinhaus-Holly Funeral Home, Westfield with Rev. Blaine Niskanen officiating. Full military honors will follow the service at the funeral home. Burial will be in Central Wisconsin Veterans Memorial Cemetery at King. A visitation will be held on Saturday from 12:00 (noon) until the hour of service at the funeral home.

Please take a moment to view the online guestbook. Send your condolences or share a memory of Harold with his family & friends.

To order memorial trees or send flowers to the family in memory of Harold Harris, please visit our flower store.