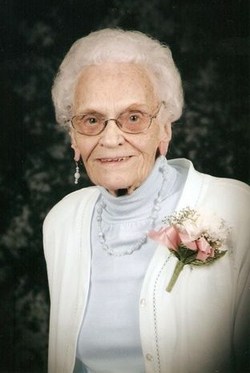 Biography Harriett Teckla Augusta Urbach, age 93 of Elgin, IL and formerly of Montello, WI, passed away on Tuesday, December 27, 2011 at Rosewood Care Center, Elgin, IL. She was born on August 7, 1918 in Rockford, IL, daughter of the late Hjalmer and Elin (Lundin) Goranson. Harriett graduated from Rockford High School in 1936. She married Elmer Henry Jacob Urbach on March 12, 1938 in Rockford, he preceded her in death on September 7, 2007. Harriett was a member of the American Legion Ladies Auxiliary Post #84 in Monroe, WI. She enjoyed fishing, bowling, playing cards, but most of all raising and spending time with her family.

A funeral service for Harriett will be held on Saturday, December 31, 2011 at 11:00 a.m. at Trinity United Methodist Church, Montello with Rev. Dawn Helton-Anishinaabeqwa officiating. Interment will be in Montello City Cemetery. A visitation will be held on Friday, December 30, 2011 from 4:00 to 7:00 p.m. at Steinhaus-Holly Funeral Home, Westfield, WI and on Saturday from 10:00 a.m. until the hour of service at the church.

To order memorial trees or send flowers to the family in memory of Harriett Urbach, please visit our flower store.