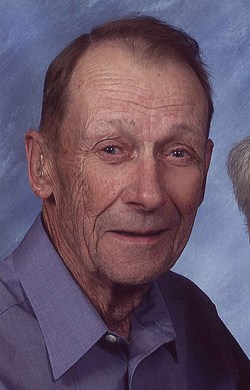 
Harry Gramse, age 81 of Westfield, passed away peacefully at home on Friday morning, October 19, 2012. Born to Harry and Ida Gramse on March 8, 1931, he proudly performed his duty as a Marine in the Korean War and when he returned home he married the love of his life, Elaine Hell on August 22, 1953. He settled on the family homestead where he contentedly raised his family. He was an accomplished carpenter, talented wood carver, an avid hunter, fisherman—outdoorsman, with a profound understanding and appreciation for nature. He enjoyed life’s simplest gifts: a walk in the woods, a well-written story, the sound of a whippoorwill, the loyalty of a fine dog, a home-cooked meal and the love of his family.

He was a remarkable man.

A funeral service for Harry will be held on Tuesday, October 23, 2012 at 11:00 a.m. at St. Paul’s Lutheran Church of Crystal Lake with Pastor Blaine Niskanen officiating. Burial will be in the parish cemetery. A visitation will be held on Monday, October 22, 2012 from 5:00 to 8:00 p.m. at Steinhaus-Holly Funeral Home, Westfield and on Tuesday from 10:00 a.m. until the hour of service at the church. Memorial donations can be given to the Organ Replacement Fund at St. Paul’s.

To order memorial trees or send flowers to the family in memory of Harry Gramse, please visit our flower store.