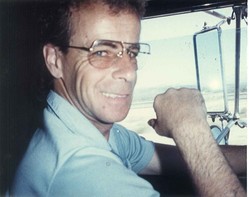 
Henry “Sonny” B. Hoevel, age 68 of Montello, passed away unexpectedly on Monday, November 24, 2014 at Montello Care Center. He was born on November 26, 1945 in Eau Claire, WI to Henry and Winifred (Lawrence) Hoevel. Sonny married Charlene Wasson on September 10, 1966 in Spring Valley, WI. He worked as a semi driver for many years hauling heavy equipment across the country and did so without ever being in an accident. Sonny enjoyed going to auctions, watching NASCAR and being an avid outdoorsman. He was a people person who had an infectious smile and was loved by everyone. Sonny loved his pets and spending time with his family.

Please take a moment to view the online guestbook. Send your condolences or share a memory of Sonny with his family & friends.

To order memorial trees or send flowers to the family in memory of Henry Hoevel, please visit our flower store.