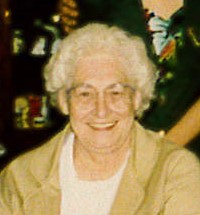 Irmabelle Marie Ferch, age 91 of Westfield, passed away peacefully in the hands of God on Wednesday, December 26, 2018 at the Montello Care Center.  She was born on July 10, 1927 at home in Coloma, daughter of the late Walter and Hilda (Powell) Schrank.  Irmabelle married Robert Jones on November 20, 1945 in Alton, IL, he preceded her in death on June 30, 1976.  She later married George Ferch on November 24, 1979 in Westfield, he preceded her in death on November 5, 1996. Irmabelle worked as a professional seamstress for most of her life.  She also took in and cared for foster children for many years.  Irmabelle’s most enjoyable times were fishing with her family and friends.

A funeral service for Irmabelle will be held on Monday, January 7, 2019 at 12:00 noon at Steinhaus-Holly Funeral Home in Westfield with Father Savio Yerasani officiating.  Burial will be in Riverside “Lawrence” Cemetery, Town of Westfield.  A visitation will be held on Monday from 10:00 a.m. until the hour of service at the funeral home.

Please take a moment to view the online guestbook.  Send your condolences or share a memory of Irmabelle with her family & friends.

To order memorial trees or send flowers to the family in memory of Irmabelle Ferch, please visit our flower store.