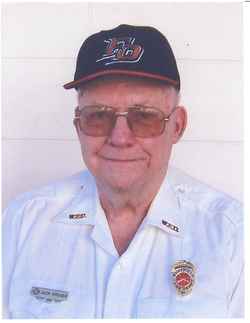 
Jack Kruger, age 83 of Westfield, passed away peacefully on Saturday, April 14, 2012 at his home. He was born on October 21, 1928 in Westfield, son of the late Otto and Myrtle (Campbell) Kruger. Jack graduated from Westfield High School in 1947. He proudly served his country in the United States Air Force as a Crash Crew Firefighter from 1948 to 1952. Jack married his high school sweetheart, Elaine Persack on December 18, 1952 in Harrisville, she preceded him in death on January 22, 2010. He went to work for his dad in the family business, Kruger’s Meat Market from 1952 to 1970 specializing in smoked ring bologna and ring liver sausage. In 1970, Jack was among the first five to be hired at Westfield Equipment-Power Packer Division, retiring in 1995. He was a member of the Westfield Volunteer Fire Department from 1952 till the present, serving as Chief for 25 years. Jack’s passion was his family, woodworking and a good cigar. He was an avid Packer and Badger fan.

A funeral service for Jack will be held on Friday, April 20, 2012 at 11:00 a.m. at St. John Lutheran Church, Harrisville with Rev. Blaine Niskanen officiating. Burial will be in Westfield East Cemetery with full military honors and a firefighter last alarm ceremony. A visitation will be held on Friday from 9:00 a.m. until the hour of service at the church.

To order memorial trees or send flowers to the family in memory of Jack Kruger, please visit our flower store.