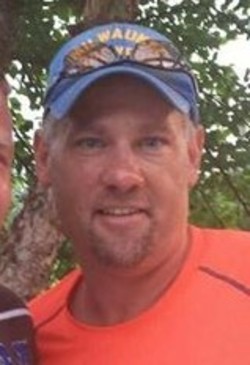 Jared Stampfl, age 41 of Westfield, went to his eternal home surrounded by his loving family on Thursday, May 28, 2015 at Divine Savior Hospital in Portage following a courageous fight against cancer. He was born on May 16, 1974 in Portage to Jerry and Holly (Alden) Stampfl. Jared graduated from Westfield High School in 1992. He married the love of his life, Erin Koelbl on September 19, 1998 in Montello. This marriage was blessed with two children who became the pride and joy of Jared’s life. He worked a variety of jobs until he finally found his calling as a Recreational Specialist at FCI of Oxford. Jared was an avid sportsman who enjoyed fishing, golfing and hunting, especially his annual hunting trip to Colorado. His favorite trip to Colorado was this last year when his son, Camden was able to go along. His true passion was baseball, whether he was playing, coaching or watching his children play the game. Jared was a friend to many but cherished his closest friends who were like brothers to him.

A funeral service for Jared will be held on Tuesday, June 2, 2015 at 6:00 p.m. at Harrisville Sportsmen’s Club Community Center in Harrisville. A visitation will be held on Tuesday from 2:30 p.m. until the hour of service in Harrisville. According to Jared’s wishes he will be cremated. In lieu of flowers, memorials would be appreciated to the Westfield Area Baseball Program or Budda Box Against Cancer of Marquette County.

Please take a moment to view the online guestbook. Send your condolences or share a memory of Jared with his family & friends.

To order memorial trees or send flowers to the family in memory of Jared Stampfl, please visit our flower store.