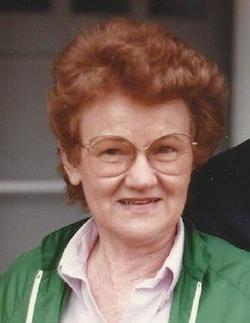 Jessie “Jay” Hamilton Nelson Van Gilst, age 93 of Lake Ridge, Virginia, left this life on Sunday, June 28, 2015 surrounded by family and their love for her. She was born in Westfield, Wisconsin on December 9, 1921 and was the last remaining child of Robert and Sarah Hamilton in the farming community of Russell Flats. Jay is survived by her daughter, Kathy (Phil) Myers, as well as her son and his family, Tom (Pat) and Lydia Nelson. Jay was blessed with having two wonderful husbands. She married Tom Nelson in January of 1944 in Key West, Florida while he was in the Navy during WW II. That marriage ended with Tom’s death in 1985. In September 1998 she was remarried to Jerry Van Gilst and they shared a happy life together until Jerry’s death in 2014.

During her first marriage Jay and her family experienced many adventures in the rural southeastern US because of her husband’s career as a research scientist with the US Forest Service. Jay took care of the kids while Tom did research on how trees grow bigger and faster at the Hitchitee Experimental Forest in Georgia and later at the Coweeta Experimental Forest in the mountains of western North Carolina. There were tours of duty with the Forest Service in Athens, Georgia and Asheville, North Carolina. The family also lived in New Orleans, Louisiana where Jay completed her college degree since she interrupted her initial undergraduate studies to get married. Jay and Tom finally moved to the Washington DC area where they lived for the next 25 years until his death.

Jay married Jerry Van Gilst in Fairfax, VA. Jerry was a widower and had been a colleague of her first husband in the US Forest Service. They shared a wonderful retirement life of travel, gardening, family, friends and church activities at Providence Presbyterian Church in Annandale, VA.

Throughout her life Jay touched many people with her love, kindness and friendship. The foundations of her life were her family, her faith and her friends. She remained so very positive about everything in her life right up to the end which was mercifully peaceful.

A memorial service for Jay will be held on Saturday, July 18, 2015 at 11:30 a.m. at First Presbyterian Church of Westfield with Rev. Janet Ruark officiating. A memorial visitation will be held from 10:30 a.m. until the hour of service at the church. Inurnment will be in Oak Hill Cemetery, Town of Westfield. Another memorial service is planned for her family and friends in the Washington DC area on Saturday, August 15. This celebration of her life will be held at the retirement home where she and Jerry resided for the past 15 years: Westminster at Lake Ridge, 12191 Clipper Drive, Lake Ridge VA.

To order memorial trees or send flowers to the family in memory of Jessie Gilst, please visit our flower store.