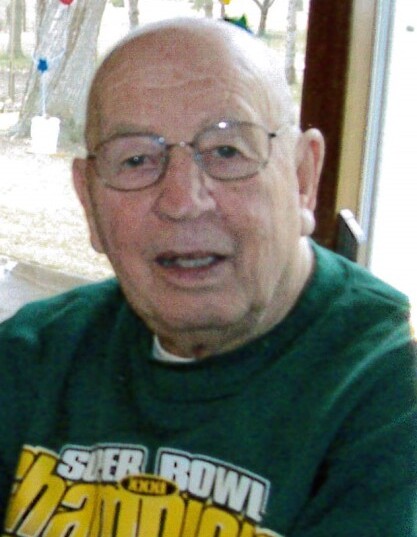 John A. Severson, age 88 of Budsin, went to be with his Lord and Savior on Thursday, May 13, 2021 at Juliette Manor in Berlin following a fall at his home.  He was born on April 6, 1933 in Phelps, WI to Arnold and Edith (Caskey) Severson.  John proudly served his country in the U.S. Army as a M.P. during the Korean War.  He married the love of his life, Nancy Wuerch on September 28, 1957 in Oxford.

John was an avid outdoorsman who loved deer hunting, which was a family affair year after year on the family farm.  He also hunted turkey, ducks and pheasants.  Fishing was another favorite hobby, whether he was fishing the Mecan River on the family farm or taking fishing trips with his wife, Nancy and Lester and Helen to Canada, Minnesota or Phelps, WI.  John enjoyed trapping and relished the idea that he had passed on his love of the outdoors to his sons and grandson.

He loved working on the family farm, raising cattle, ducks and chickens, gardening and planting crops, traveling and listening to country music, which led to him and Nancy taking several trips to Branson and Nashville.  He also worked at Montello Products for seven years and at Speed Queen in Ripon for 30 years, retiring in 1995.

John enjoyed watching the Wisconsin sports teams and telling stories.  He always had an opinion to share with those that would listen.  His witty comebacks, shared wisdom and humor will be missed.  John was immensely proud and inspired by his grandkids, Jill and Kyle and spoke of them often.

He was a life-time member of St. John Lutheran Church in Budsin where he served in several capacities.  You could find John in church on Sunday worshipping the Lord as his faith was especially important to him.

A memorial service for John will be held on Saturday, May 22, 2021 at 1:00 p.m. at Steinhaus-Holly Funeral Home in Westfield with Rev. John Bumgardner officiating.  Full military honors will follow the service at the funeral home.  A visitation will be held on Saturday from 11:00 a.m. until the hour of service at the funeral home.  Inurnment will be in St. John Lutheran Cemetery in Budsin at a later date.  In lieu of flowers, a memorial will be established.

Please take a moment to view the online Tribute Wall.  Send your condolences or share a memory of John with his family & friends.

To order memorial trees or send flowers to the family in memory of John Severson, please visit our flower store.