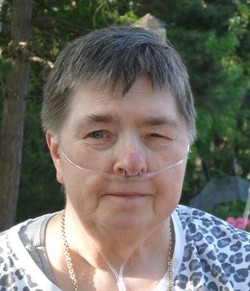 Judy E. Rozek, age 68 of the Town of Harris, passed away peacefully on Thursday, June 23, 2016 at UW Hospital in Madison. She was born on October 5, 1947 in Green Bay, daughter of the late Stanley and Agnes (Shuda) Jakusz. Judy married Robert J. Rozek on April 4, 1970 in Stevens Point. Bob preceded her in death on February 19, 2009. She enjoyed playing bingo and visiting with family and friends. Judy especially looked forward to spending her Sundays with her son, Mike and her dogs.

Survivors include her son, Mike Rozek, Harrisville; one brother, Paul Jakusz, Stevens Point; two nieces, Morgan and Jordan Jakusz; many other relatives and friends. Judy was preceded in death by her infant brothers and sisters.

Please take a moment to view the online guestbook. Send your condolences or share a memory of Judy with her family & friends.

To order memorial trees or send flowers to the family in memory of Judy Rozek, please visit our flower store.