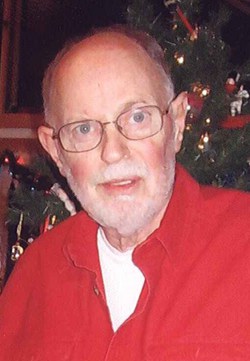 
Keith C. Urbach, age 72 of Westfield joined the Lord to go on his next adventure on Feb. 20, 2012. Keith was born on March 2, 1939 in Rockford, Illinois. He was the son of Harriett and Elmer Urbach who preceded him in death.

Keith served in the U.S. military and then became an electrician and a proud member of Local 159 in Madison. He spent many hours hunting and fishing, but his greatest moments were time spent with his family and friends. He also enjoyed traveling, especially to the southwest.

Keith is survived by his wife of 46 years, Jean, and his two children, Kelly (Elmer) Megna of Muskego and Craig (Kelly) Urbach of McFarland. He is further survived by five grandchildren, Alyssa, Samantha and Anna Megna and Ashlee and Caleb Urbach.

A celebration of life service for Keith will be held on Saturday, February 25, 2012 at 11:00 a.m. at First Presbyterian Church, Westfield with Pastor Barb Merwin officiating. Full military honors will follow the service at the church. A memorial visitation will be held on Saturday from 9:00 a.m. until the hour of service at the church. In lieu of flowers, a memorial will be established.

To order memorial trees or send flowers to the family in memory of Keith Urbach, please visit our flower store.