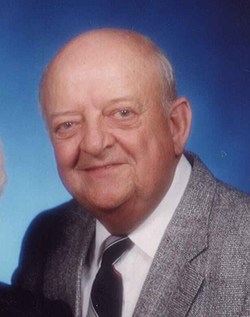 Loren “Larry” Ketchum, age 78 of Westfield, passed away on Monday, October 8, 2012 at Divine Savior Hospital, Portage. He was born on September 25, 1934 in Baraboo to Ralph and Lucille (Squires) Ketchum. Larry graduated from Wisconsin High School, Madison in 1952 and UW Madison in 1959. He proudly served his country in the United States Army from 1959 – 1961 and 1966 – 1968. Larry married Dorothy Becton on June 12, 1959 at Ft. Gordon in Georgia. He joined the U.S. Bureau of Prisons at Terre Haute, IN, then served at five more facilities and the central office in Washington D.C., retiring in 1984 from FCI, Oxford. Larry served on the Marquette County Board, Marquette County Crime Stoppers, Westfield Village Board and Village of Westfield Volunteer Fire Department. He was a member of the American Legion Post #244 of Westfield and former member of Commonwealth Lodge 325 and F&AM, Madison. Larry enjoyed spending time with his family, especially his grandchildren, along with gardening, woodworking, genealogy and history in general.

A funeral service for Larry will be held on Friday, October 12, 2012 at 11:00 a.m. at Steinhaus-Holly Funeral Home, Westfield with Pastor Barb Merwin officiating. Burial will follow at the Westfield East Cemetery with full military honors. A visitation will be held on Thursday from 5:00 to 7:00 p.m. and on Friday from 10:00 a.m. until the hour of service at the funeral home. In lieu of flowers, memorials would be appreciated to Village of Westfield Park Memorial or Budda Box Against Cancer.

To order memorial trees or send flowers to the family in memory of Larry Ketchum, please visit our flower store.