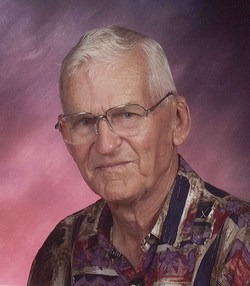 Leo V. Parker, loving husband, father, grandfather, great grandfather and wonderful friend of many went to his heavenly home on Saturday, March 23, 2013. He was born on September 1, 1923 in Westfield, son of the late Lloyd and Norma (Alexander) Parker. Leo proudly served his country in the United States Army-Air Force. He married June J. Schauer on December 7, 1946. Leo worked as a mail carrier for 42 years. He was an active member of Immanuel Lutheran Church and a member of American Legion Post #244 of Westfield for 65 years. Leo was always present for his children, grandchildren and great grandchildren’s school and sporting activities. He was an avid Cubs fan.

A funeral service for Leo will be held on Wednesday, March 27, 2013 at 11:00 a.m. at Immanuel Lutheran Church, Westfield with Rev. Gary H. Schultz officiating. Interment will be in Westfield East Cemetery with full military honors by American Legion Post #244. A visitation will be held on Tuesday from 4:00 to 7:00 p.m. at Steinhaus-Holly Funeral Home, Westfield and on Wednesday from 10:00 a.m. until the hour of service at the church. In lieu of flowers, memorials would be appreciated to Immanuel Lutheran Church or American Legion Post #244.


Please take a moment to view the online guestbook. Send your condolences or share a memory of Leo with the Parker family.

To order memorial trees or send flowers to the family in memory of Leo Parker, please visit our flower store.