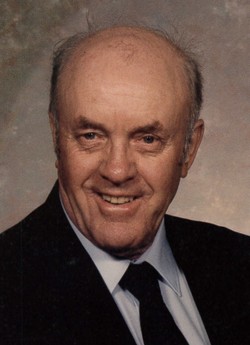 Lester “Bill” Rodger, age 90 of Oxford, passed away peacefully on Wednesday, June 15, 2016 at Harris Villa in Westfield. He was born on December 26, 1925 in the Town of Jackson, Adams County, Wisconsin to John and Stella (Foat) Rodger. Bill proudly served his country during WW II in the European Campaign with the U.S. Army. He married Lorraine Nelson on October 7, 1950 in Dubuque, Iowa. Bill was a member and the first elected Fire Chief of the Oxford Fire Department. He was a life member of the Oxford VFW, Neenah Valley Post 6003 and D.A.V. Bill served on the Board of Directors for the Marquette-Adams Telephone Co-op and the Village of Oxford Board. He worked as a rural mail carrier for over 30 years. Bill was an active member of the Oxford Bible Church. He enjoyed deer hunting season, fishing, his family and especially his grandchildren.

A visitation for Bill will be held on Monday, June 20, 2016 from 9:00 to 11:00 a.m. at Oxford Bible Church followed by a funeral service at 11:00 a.m. with Rev. Donald Wedel officiating. Burial will be in Oxford Village Cemetery with full military honors presented by Oxford VFW Post 6003.

The family would like to thank Nan Hinze and her staff at Harris Villa and Agnesian Hospice Hope for all of their loving care of Bill.

Please take a moment to view the online guestbook. Send your condolences or share a memory of Bill with his family & friends.

To order memorial trees or send flowers to the family in memory of Lester Rodger, please visit our flower store.