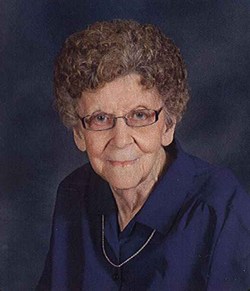 Marian A. Black (nee Quinn), age 97 of Westfield and formerly of Madison, passed away on Thursday, November 14, 2013 at Montello Care Center. She was born on October 9, 1916 in Westfield to Ben and Leila (Huber) Quinn, the third of ten children.

Marian graduated from Westfield High School in 1934 and then moved to Madison. She met and married Randall L. Black on September 24, 1938. Marian lived in Madison for over 40 years and raised two daughters. She was a homemaker and worked for the State of Wisconsin. Randall passed away in 1981. In 1982, Marian retired from state service and moved back to Westfield where she enjoyed being back with her brothers and sisters. She was a member of Immanuel Lutheran Church. Marian enjoyed being with her family and many grandchildren, traveling, playing cards, going to Badger games and watching Packer and Brewer games.

Mom was a good cook and made the most wonderful pies. Her fondest adventure was in 1970 when she went to Europe with her sister, Doris. She also traveled to Branson in 1996 for her 80th birthday with her daughters and many other trips in the U.S. and Canada.

The family would like to thank the entire staff at Montello Care Center for all the care they gave mom.

A very special thank you to our Aunt Marlene Wenzel for all the care and help she has given mom and the family over the past several years.
We were truly blessed to have had such a kind and loving mother, grandmother, sister, aunt and friend. We will miss you mom and your amazing witty sense of humor.

A funeral service for Marian will be on Tuesday, November 19, 2013 at 11:00 a.m. at Immanuel Lutheran Church, Westfield with Rev. Gary H. Schultz officiating. Burial will be in Roselawn Memorial Park, Monona on Wednesday at 11:00 a.m. A visitation will be held from 9:30 a.m. until the hour of service on Tuesday at the church.

Please take a moment to view the online guestbook. Send your condolences or share a memory of Marian with her family.

To order memorial trees or send flowers to the family in memory of Marian Black, please visit our flower store.