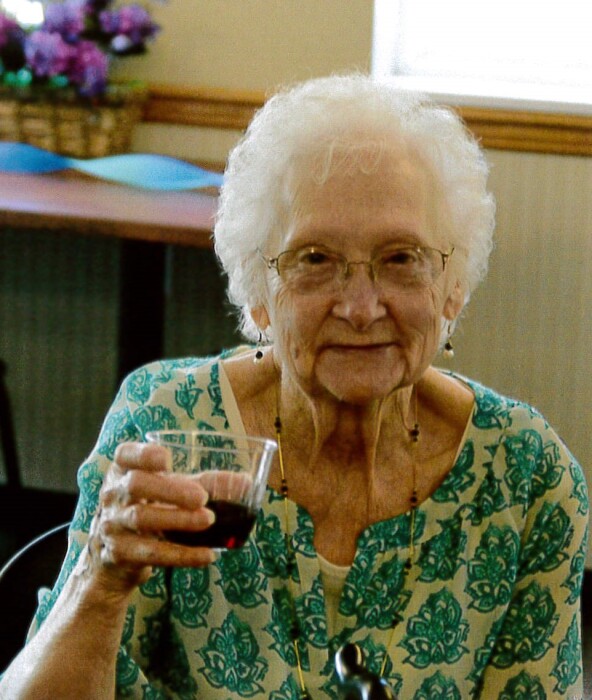 Marion Louise Richardson, age 94 of Marshfield, formerly of Oxford, passed away peacefully on Sunday, February 14th, 2021 at Stoney River Assisted Living Facility in Marshfield, WI.  She was born to Jerry and Clara (Pedersen) Fredriksen on May 8th, 1926 in Chicago, IL.  She grew up in Lombard, IL and graduated from York High School in 1944.  She worked for U.S. Immigration in downtown Chicago where she met her first husband, Gordon Richardson.  She left Chicago for CA with her parents in her mid-twenties, with Gordon following shortly thereafter.  She married Gordon Richardson on May 8, 1954 in Monterey Park, CA.  She quickly became a mother to his two daughters, Karen and Sandie when they joined them in CA after their mother passed away.  From their marriage they had a son, Brian and a daughter, Ellen.  In 1970 they moved to Oxford, WI to be closer to family.  She and her husband were active in the community.  She was a member of the Oxford VFW Post #6003, Oxford Lioness Club, Oxford Fire Department Fireflies and supported her husband in the development of the Emergency Medical Service in Oxford.  While she stopped working out of the home after she had children, she kept busy as homemaker, being a volunteer to many organizations and a caregiver for her parents.  In later years they wintered in FL, eventually moving there to enjoy retirement.  They were married 38 years before his death in 1992.  She met and married Marcel Aussant on May 25th, 2002 in Bay City, MI.  Her retirement years were spent golfing, playing penny slots at the casino, traveling, hosting gatherings in the retirement community and enjoying her favorite glass of red wine.  She eventually moved back to WI after Marcel passed away.  She spent the remaining years of her life making memories with her family.  She especially loved spending time with her granddaughter’s, Natasha, Vanessa and Paige and her great-grandchildren, Meghan, Haley, Brody, Kennedy, Parker and Dylan.  They were sure to bring a smile to her face even when her memory had faded from dementia.

She was preceded in death by her parents, Jerry and Clara, three siblings, Bernice Fredriksen, Harold (Gladys) Fredriksen and Ruth (Maurie) Martel; both of her husbands, Gordon Richardson and Marcel Aussant; her son, Brian Richardson along with stepdaughters, Sandie Lacey and Karen Grant.

The family would like to thank the staff at Stoney River for the loving care and support they provided to Marion.  We would also like to extend a special thank you to Heartland Hospice for the comfort and compassion in caring for her.

A private graveside ceremony will be held at the Oxford Village Cemetery for the immediate family.

Although our hearts are heavy, today we will celebrate her life with a glass of her favorite red wine.

Please take a moment to view the online Tribute Wall.  Send your condolences or share a memory of Marion with her family & friends.

To order memorial trees or send flowers to the family in memory of Marion Richardson, please visit our flower store.