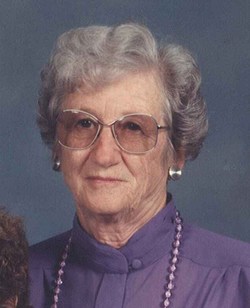 
Marjorie E. Gray (nee Scholes), age 98 of Westfield, passed away peacefully on Thursday, May 16, 2013 at Harris Villa in Westfield. She was born on April 29, 1915 in Moundville, daughter of the late Elmer and Elsie (Rood) Scholes. Marge married John D. Gray on January 26, 1935 in Briggsville, he preceded her in death on June 8, 1982. She was a long time member of Faith United Methodist Church, Westfield. Marge held several jobs. She worked at Badger Ordinance, Dairyland Poultry, Brakebush Brothers and was a homemaker. Marge enjoyed music, winters in Florida and traveling, including many trips with her sisters.

A funeral service for Marge will be held on Monday, May 20, 2013 at 11:00 a.m. at Faith United Methodist Church, Westfield with Rev. Marty Nolet officiating. Burial will be in Westfield East Cemetery. A visitation will be held on Monday from 9:30 a.m. until the hour of service at the church. In lieu of flowers, memorials are appreciated to Faith United Methodist Church.


Please take a moment to view the online guestbook. Send your condolences or share a memory of Marge with her family.

To order memorial trees or send flowers to the family in memory of Marjorie Gray, please visit our flower store.