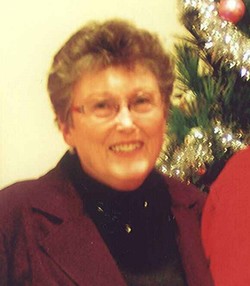 Mary Jane Bandt, age 76 of Coloma, passed away on Monday, October 12, 2015 at her home. She was born on April 23, 1939 to Lawrence and Lucille (Gear) Buchanan in the Town of Coloma, Wisconsin. Mary Jane married Arden Bandt on May 3, 1958. Mary Jane graduated from Westfield High School and attended Madison Business College. She was employed at M & I Peoples Bank in Coloma for 37 years holding several positions, retiring as Vice President. Mary Jane was a life-long member of Calvary United Methodist Church of Coloma and served as choir director for 40 years, a member of Coloma Lions, Coloma area Historical Society and Thyme Shares Master Gardner Club of Marquette County. She was also a founding member of Friends of the Park in Coloma. Mary Jane was recognized as Waushara County Citizen of the Year in 2014. She enjoyed traveling, hiking, downhill skiing, swimming, gardening, flowers, going to the cabin up north and spending time with her family. One of her greatest accomplishments was climbing Long’s Peak in Colorado with an elevation of 14,255 ft. at the age of 49.

A funeral service for Mary Jane will be held on Saturday, October 17, 2015 at 11:00 a.m. at Prince of Peace Lutheran Church in Coloma with Rev. Min Chea of Calvary United Methodist Church officiating. Burial will be in Hillside Cemetery, Coloma. A visitation will be held on Friday, October 16, 2015 from 4:00 to 7:00 p.m. at Steinhaus-Holly Funeral Home of Westfield and on Saturday from 9:00 a.m. until the hour of service at Prince of Peace Lutheran Church, Coloma. In lieu of flowers, memorials would be appreciated to Friends of the Park in Coloma.

The family would like to say thank you to Kasie Kopach for her care and compassion in caring for Mary Jane. Also to Cara Gundrum and Ministry Home Care Hospice.

Please take a moment to view the online guestbook. Send your condolences or share a memory of Mary Jane with her family & friends.

To order memorial trees or send flowers to the family in memory of Mary Bandt, please visit our flower store.