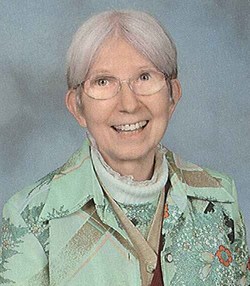 Maxine Peroutka, age 73 of Westfield, passed away on Monday, March 19, 2012 at Divine Savior Hospital in Portage. She was born on July 10, 1938 in Wausau, the 5th of 7 children to Philip and Julia Koppa. She graduated from Newman High School in 1956 and continued with further education and vocational aspiration at the Sisters of the Divine Savior Motherhouse in Milwaukee. She took initial vows of the order, chose the name Sister Julia, and served with the order for 5 years as a grade school teacher in Wausau, also living for a time in Landover Hills, MD. Maxine left the convent soon after and several years later obtained a Masters’ Degree in Special Education from UW Oshkosh. During this time, she met Richard Peroutka while boarding at Richard’s parents’ home in Oshkosh. Maxine and Richard were married on July 3, 1976 at St. Michael’s Church in Wausau. They lived at first in Neenah and then moved to Marquette County when Maxine obtained a teaching position at Oxford Elementary School. In 1981, Maxine and Richard welcomed their only child, daughter Francine. Maxine was soon offered a position to teach remedial reading at Westfield Elementary School, and the family moved to Westfield in 1982. Maxine and Richard divorced in 1988, but Maxine continued to teach at Westfield through 1999 when she retired from her position.

Maxine’s Catholic faith and devotion to God and Jesus played a vital and constant part in her life. Whenever there was a struggle in life, Maxine’s response was always, “just pray about it.” She relied on the faith and strength of Jesus daily, especially throughout her courageous struggle with Parkinson’s disease. She often said, “Jesus helps us bear whatever crosses He asks us to bear.” Maxine was a very patient schoolteacher, helping dozens of children learn to read easier and excel in school and life. She was also very involved in her church, Good Shepherd Parish in Westfield, as a Sunday school teacher, lay minister, reader, choir member, and with other activities. Maxine loved to listen daily to Christian radio and took daily time for prayer and devotions. She loved the beauty of God’s creation in flowers, landscapes, and sunsets. She strived to serve Jesus in whatever capacity she could, through writing notes of gratitude and sharing her faith with others or thanking someone for the simplest of things. She chose to live a simple life in order to give all she could to those who needed more. She was an inspiration to all who met her and had the privilege of knowing her.

To order memorial trees or send flowers to the family in memory of Maxine Peroutka, please visit our flower store.