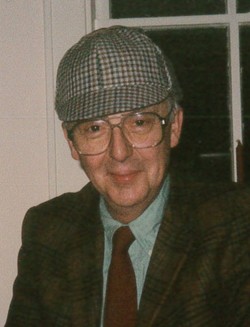 
Michael H. McCoy, 78, of Madison, graduated from life’s journey at Montello, Wisconsin, on September 7, 2016. He was born in Shelbyville, Kentucky, the second child of Wade William McCoy and Jane Padgett, on June 29, 1939. A graduate of Shelbyville High School, he attended Indiana University, where he earned a bachelor of arts in journalism. While at IU, Mike (like his father) was editor-in-chief of The Daily Student, was active in Air Force ROTC, participated in the Marching Hundred, served as chapter president of Indiana Beta of Phi Kappa Psi, and a member of Sigma Delta Chi, the national student journalism fraternity.

Following commencement in 1961, Lt. McCoy’s military assignments took him to France where he was a front-line participant in the Cold War. He traveled throughout Europe, including behind the Iron Curtain, where his travels took him as far as Hungary, Romania, Czechoslovakia, Poland, the Soviet Union and the German Democratic Republic. His tour of duty ended in 1964, when he returned to the States for a job with the Indianapolis Times. McCoy’s military service continued through participation in Air Force National Guard in both Indiana and Wisconsin.

With the Times’s demise, Mike came to Wisconsin in 1965, first working at the Milwaukee Sentinel as their Madison-based reporter on state government. Soon thereafter, he entered public service, working in public relations for the state. He served as personal and press aide to Governor Warren Knowles during the Governor’s overseas trade mission to South America in 1967. McCoy served 27 years with the state, ultimately acting as public information officer for the department of industry, labor and human relations and its successor agencies.

In addition to his professional life, McCoy was an active and vital supporter of a number of causes and groups, principally advocating on behalf of the passenger rail throughout Wisconsin, as a founder of Pro-Rail Wisconsin. He was instrumental in lobbying then-Senator Bob Kastenmeier in the establishment of the Hiawatha route between Milwaukee and Chicago.

Mike’s interests were myriad. A proud barbershopper, he sang bass/baritone for more than 20 years with the Capital Chordsmen chorus, for which he wrote the stage play When America Went to War, performed at the Middleton Performing Arts Center in 2012; played trumpet in both concert and swing-era bands; and was active in the MadCity Investment Club since 1997.

A lifelong Presbyterian, Mike held membership at Covenant Presbyterian Church in Madison for more than 40 years. He taught Sunday School and advised the youth fellowship there for several years. A lifelong influence on his faith included the works and writings of the Rev. Peter Marshall, his childhood pastor.

Survivors include his children, a daughter, Anne Elizabeth McCoy of Toronto, Ontario; a son, Jordan Padgett McCoy of Montello; six grandchildren, Emily Olson, Evelyn McCoy, Heidi McCoy, Scott McCoy, Teagan McCoy and Simone McCoy; the mother of his children, Mary McCoy of Winona, Minnesota; a brother-in-law, LaMar Gaston of Louisville, Kentucky; nephews, nieces, grandnephews and grandnieces. He was preceded in death by his parents, his stepmother; and a sister, Susan McCoy Gaston, and lifelong friend and fraternity brother, Kent Owen of Bloomington, Indiana.

A graduation ceremony for Michael will be held on Saturday, October 8, 2016 at 3:00 p.m. with a memorial visitation beginning at 2:00 p.m. at Covenant Presbyterian Church in Madison. A reception will immediately follow the ceremony. In lieu of flowers and in the spirit of Michael's final wishes, the family suggests contributions be made to organizations that work in the service of others.

Please take a moment to view the online guestbook. Send your condolences or share a memory of Michael with his family & friends.

To order memorial trees or send flowers to the family in memory of Michael McCoy, please visit our flower store.