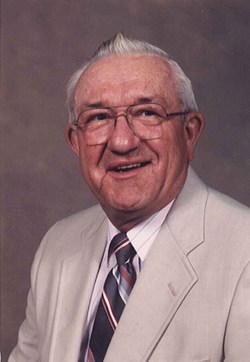 
Norbert Edward Judas of Westfield, beloved patriarch of his family, was born on the home farm in the Township of Harris, Marquette County Wisconsin on June 19, 1927 to Walter Judas and Alma (nee Lange) Judas. Norb died at Harris Villa on May 31, 2012 at the age of 84.

While still a High School student, Norb began working as a Cheese maker's Helper at the Westfield Cooperative Creamery. After graduation, he took a short hiatus from the Dairy industry to be in the Army where he worked in a Tuberculosis ward and also received training as a dental assistant. Upon his return home, he spent the next almost 45 years in positions of increasing responsibility in the Dairy industry (including route salesman, production worker, fieldman, field Supervisor, Dairy Assistant Manager, and Dairy General Manager for Central Wisconsin Coop and the Alto Dairy).

Norb also loved Farming, so in 1974 he purchased the home farm from his parents where he raised alfalfa hay, fattened Holstein steers, and owned several Belgian horses. (He also made sure that there was a pony for the grand-kids to ride.) Due to health reasons, Norb sold the "Century" farm that had been in his family for over 100 years in 2002.
Upon retirement from the Dairy industry, he married Elaine (nee Marotz) Dahlke. Together they enjoyed spending time with their extended family and traveling including trips to Branson, California, Washington D.C., Hawaii, and Alaska.

Norb held several offices during his lifetime as a faithful church member of Immanuel Lutheran Church in Westfield and later at St. John's Lutheran Church in Harrisville. He also joined the Gideon's and supported their mission.
He was preceded in death by his wife Maeda (nee Schwanke) in 1959 and by his wife Selma (nee Muehrer) Mashack in 1987; his father Walter Judas in 1987, and his mother Alma Judas in 1998.

He leaves behind to mourn him his wife, Elaine; daughter Joanne of New London, step-son Roger (Jean) Mashack of Elkhorn and three step-daughters Debra (Luther) Torgerson of Madison, Vicki (Fred) Landes of Sun Prairie, and Connie (Danny) Upchurch of Fitchburg along with 10 grandchildren and 10 great-grandchildren.

A funeral service for Norb will be held on Tuesday, June 5, 2012 at 11:00 a.m. at St. John Lutheran Church in Harrisville with Rev. Blaine Niskanen officiating. Burial will be in Westfield East Cemetery with full military honors. A visitation will be held on Monday, June 4, 2012 from 4:00 to 7:00 p.m. at Steinhaus-Holly Funeral Home, Westfield and on Tuesday from 10:00 a.m. until the hour of service at the church.

The family also wishes to thank Nan and the entire staff of Harris Villa for the wonderful care and attention that they gave to him. Norb always said that you are the best!

To order memorial trees or send flowers to the family in memory of Norbert Judas, please visit our flower store.