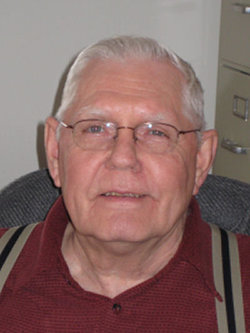 Orval E. Vogel, age 78 of Town of Harris. He was born on October 2, 1936 in Starks, Wisconsin to Gerhardt and Verna (Smith) Vogel. Orval was born the youngest of five siblings, and his family moved to the Westfield area when he was in 2nd grade. He graduated from Westfield High School in 1954, and married Carol Anne Frank on June 2 of 1956. They spent a few years in the area of Grayslake IL, returning to the Westfield area family farm when their 3 sons were very young and raised them there.

His life’s work included various time in farming, plumbing, construction, his own excavating business, and – for the last 35 years of his working career – at Brakebush Brothers Inc. He held various positions around the plant until retiring at the age of 75 in 2012.

Orval is a self-described “jack-of-all-trades” … “but master of none,” as he would always add. He was constantly involved with some type of building or repair project – with tools all over the place. He would often grumble about having so much to do, but he was happiest when he had his hands dirty and was tinkering on something – especially when he had one of his sons at his side.

On Tuesday, September 8, 2015, Orval died suddenly in a machinery accident. But joyfully, he went home to Heaven – a sinner, saved by God’s grace alone, through faith alone, in Jesus Christ alone.

Over his lifetime, Orval came to understand and believe the truth of John 3:16, “For God so loved the world that He gave His only begotten Son that whoever believes in Him should not perish but have everlasting life.” So instead of trusting a church, any religious rituals, or his own good works to get him to heaven, he believed that Jesus Christ did enough to save him by dying for his sins and purchasing for him the gift of eternal life. Orval is now experiencing the reality of 2 Corinthians 5:8 where every believer in Christ is promised by God that “absent from the body” results in being “present with the Lord.” He died without any fear of where he would spend eternity, for the Bible clearly states in 1 John 5:13 that, “These things have I written to you who believe in the name of the Son of God that you may KNOW that you have eternal life.”

Orval’s wishes were to be cremated and for no formal visitation or funeral. A private family gathering will be held.

Please take a moment to view the online guestbook. Send your condolences or share a memory of Orval with his family & friends.

To order memorial trees or send flowers to the family in memory of Orval Vogel, please visit our flower store.