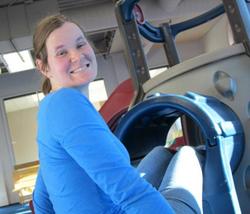 Rachael Renee Streich, age 26, of Montello, WI is now walking the streets of gold up in heaven. She passed away January 24th, 2012 at UW Madison Hospital after courageously battling with melanoma.

Rachael was born on January 20th, 1986 in Portage, WI, the daughter of Dennis and Connie Streich of Montello. Rachael had a great love of music, working with children, going thrift store shopping (she always knew how to get the best deal), and was very competitive in playing board games and cards. Rachael has touched so many lives in her short time here. Wherever she went, she proclaimed God’s love to everyone.

She is preceded in death by a Grandmother, Rhynelda Curtis.

A funeral service for Rachael will be held on Saturday, January 28, 2012 at 11:00 a.m. at St. John Lutheran Church, Budsin with Rev. Dale Boening officiating. Burial will be in St. John Lutheran Cemetery, Budsin. A visitation will be held on Friday, January 27, 2012 from 4:00 to 8:00 p.m. at Steinhaus-Holly Funeral Home, Westfield and on Saturday from 9:00 a.m. until the hour of service at the church.

To order memorial trees or send flowers to the family in memory of Rachael Streich, please visit our flower store.