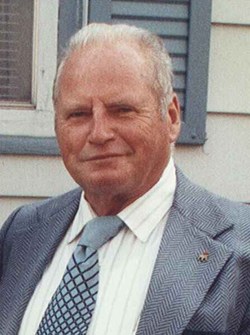 
Ralph E. Nader, age 86 of Westfield, passed away peacefully at home surrounded by his loving family from complications of cancer on Wednesday, June 25, 2014. He was born on December 11, 1927 in Lake Villa, IL to Joseph and Helen (Tweed) Nader Sr. Ralph graduated from Antioch Community High School in 1945. He proudly served his country as an Army Corporal during WW II in the United States Army. He married Anneliese Naumann in Badnauheim, Germany in 1949. He worked for Commonwealth Edison as a Lineman Special for 35 years in Waukegan, IL, retiring in 1984. Ralph was a member of the Lake Villa Volunteer Fire Department serving as Assistant Chief retiring in 1984 with 35 years of service. It was then that he and his wife, Anneliese moved to Westfield, WI where they built their dream home. Ralph was also a lifetime member of V.F.W. Post #4308 of Lake Villa, IL. He loved to spend time with his children, grandchildren and great grandchildren, time in the great outdoors hunting, fishing, camping and snowmobiling. Ralph also was an avid golfer.

Please take a moment to view the online guestbook. Send your condolences or share a memory of Ralph with his family & friends.

To order memorial trees or send flowers to the family in memory of Ralph Nader, please visit our flower store.