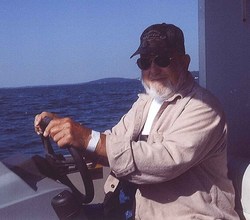 
Robert R. Ross, age 83 of the Town of Harris, passed away peacefully on Thursday, October 10, 2013 at his home. He was born on December 27, 1929 in Chicago, IL to Paul and Ann (Mikeska) Ross. Bob proudly served his country in the United States Army during the Korean War. He married Donna Meyers on September 25, 1954 in Chicago, IL. Bob was a member of American Legion Post #351 of Montello. He lived to fish, loved the outdoors and spending time with family and friends.

A funeral service for Bob will be held on Tuesday, October 15, 2013 at 11:00 a.m. at Steinhaus-Holly Funeral Home, Westfield with Father David Carrano officiating. Burial will be in Harrisville Cemetery with full military honors by American Legion Post #351 of Montello. A visitation will be held on Monday, October 14, 2013 from 4:00 to 7:00 p.m. and on Tuesday from 10:00 a.m. until the hour of service at the funeral home.


Please take a moment to view the online guestbook. Send your condolences or share a memory of Robert with his family.

To order memorial trees or send flowers to the family in memory of Robert Ross, please visit our flower store.