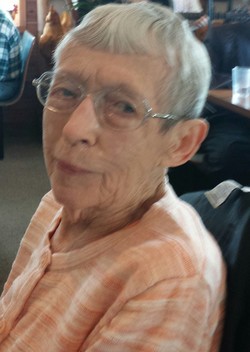 Roberta Johnson, age 99 of Westfield, passed away peacefully on Saturday, September 5, 2015 at Harris Villa of Westfield. She was born on May 19, 1916 in the Town of Westfield, Wisconsin, daughter of the late Robert and Margaret (Burgdorff) McWilliams. Roberta married Kenneth Johnson on June 7, 1941 in Westfield. Ken preceded her in death on August 1, 2011. Alongside her husband, Roberta was involved in their electrical contracting & surge dairy equipment business and later helped establish Johnson’s Laundry in Westfield. She was a member of VFW Post #8718 Ladies Auxiliary, Jolly Squares, White Trackers Snowmobile Club, Westfield Campers, Marquette County Historical Society and First Presbyterian Church of Westfield. Roberta was also a charter member of the Russell Flats 4-H Club.

A funeral service for Roberta will be held on Monday, September 14, 2015 at 11:00 a.m. at First Presbyterian Church, Westfield with Pastor Janet Ruark and Pastor Alyson Janke officiating. Burial will be in Oak Hill Cemetery, Town of Westfield. A visitation will be held on Monday from 9:00 a.m. until the hour of service at the church. Memorials would be welcome to Oak Hill Cemetery or First Presbyterian Church.

Please take a moment to view the online guestbook. Send your condolences or share a memory of Roberta with her family & friends.

To order memorial trees or send flowers to the family in memory of Roberta Johnson, please visit our flower store.