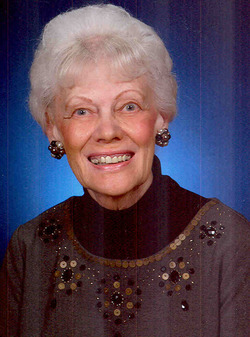 She was born April 19, 1937, in Montello, Wisconsin, the daughter of Herald and Evelyn Volbrecht. She was raised there and was a 1955 graduate of Montello High School. Ruth attended Northern Michigan University and earned a Bachelor’s and Master’s degree.

She married Philip A. Spade in Montello in 1957.

Ruth was employed at the Gwinn Public Schools for many years and retired as principal of Gilbert Elementary School in Gwinn.

She was a member and past president of the Marquette League of Women, Gwinn Historical Society and Gwinn Study Club. She was also a member of the Gwinn Library Board, Gwinn Clock Tower Restoration Committee and was the “Queen Bee” of the Glitzy Redhatters.

Ruth is survived by her husband of 56 years, Philip Spade of Gwinn; and a cousin, Roger (Sherry) Volbrecht of Monroe, WI. She was preceded in death by her parents and a cousin, Larry Volbrecht.

Visitation will also be held on Tuesday, June 11, 2013 from 10:00 to 12:00 p.m. (noon) at Steinhaus-Holly Funeral Home, Westfield. A Graveside Interment Service will follow at Oak Hill Cemetery, Town of Packwaukee with Father David Carrano officiating.

In lieu of flowers, memorial contributions can be made to UPAWS, 84 Snowfield Road, Negaunee, MI 49866 or the Ruth Spade Scholarship.


Please take a moment to view the online guestbook. Send your condolences or share a memory of Ruth with her family.

To order memorial trees or send flowers to the family in memory of Ruth Spade, please visit our flower store.